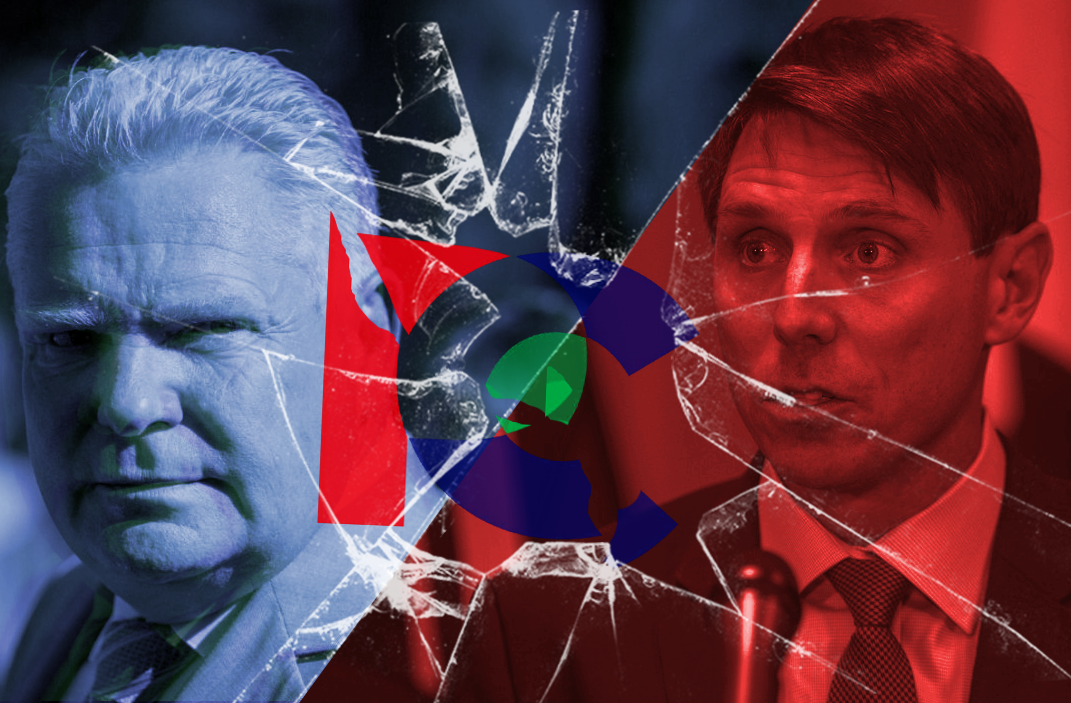 A week the Ontario PCs will live to regret

Demonstrating its reputed propensity for self-destruction in dramatic fashion, last week couldn’t have ended sooner for Ontario’s Progressive Conservatives. From Wednesday, 9:45 PM to 12:00 PM, this Monday, the Tories have spent the past few days hemorrhaging public credibility like a car pissing coolant. At the centre of the unfolding disaster is Patrick Brown. You might remember him: last week he was the province’s presumptive premier-in-waiting; that is, before he resigned his leadership at an impromptu presser late into the witching hour. Accused of sexual misconduct and facing a staff revolt, Brown appeared before the gallery with a strange mélange of shaky defiance, defeat, and bad hair – sorely absent was any sense of contrition or acknowledgement of wrongdoing from the former leader.

Since then we’ve only begun to appreciate the steep consequences of forcing a party leader to resign a hundred and thirty three days before the next provincial election. You see, politics isn’t good at improvisation. It likes to think it’s good at improvisation. But it’s not. The moment Patrick Brown resigned his leadership, the careful, scripted posturing of the Progressive Conservatives we’ve become oddly accustomed to unfolded into a slightly bemusing re-run of “Whose Line Is It Anyway?” Case in point: unprepared for the fallout, the party’s new co-leader, Sylvia Jones headed damage control that morning with all the skill of a blundering neophyte – even going as far as to minimize Brown’s resignation as “a hiccup.” To any important question of the day – Who will be interim leader? Will there be a leadership convention? – answers were still to be decided.

Brown’s sudden departure isn’t what will scuttle the party’s chances, he was never truly a popular candidate, after all – but the political bloodletting that has unfolded in his wake might. The Progressive Conservatives are likely a stronger brand without a leader as charmless and evasive as Brown; far more damaging than the simple loss of the leader will be the immediate aftermath. Indeed, in those critical few hours after Brown’s wrists were twisted into penning his own resignation, it’s possible we were witnessing the downfall of the Ontario PCs in this coming election. I count at least three key decisions that the party and its caucus have made which could ultimately prove absolutely ruinous – decisions which, unfortunately for the Tories, are non-reversible.

The first of those decisions is the negligence that landed the party in this sordid mess in the first place. The kind of negligence and disregard for women that ultimately saw a nominee green lit, despite serious allegations hanging over his head. The case of Rick Dykstra is arguably even more demonstrative than Brown’s of the systemic manner in which alleged victims have been let down by their workplaces and parties when they’ve come forward. Dykstra, the Ontario PC Party president resigned last week when news emerged that he had been under investigation in 2014 for an alleged sexual assault of an Ottawa staffer. Maclean’s, who broke the story, have done a superb job detailing the significant gaps in terms of process (e.g., a lack of a sexual harassment policy in Parliament Hill) and the inherent duress that the accuser felt. Dykstra was green lit to run for the federal Conservatives (despite these allegations) by what was described by one insider as a “gender-split vote.”

The PC Constitution states that nomination meetings for all riding associations ought to have occurred before December 31, 2017. Out of one hundred and twenty four ridings in Ontario, seventy of them – more than half – already have candidates that are named on the party’s website and have been nominated, green lit and approved by the Progressive Conservatives. Nominations can be reversed by the party executive but often not without blow back from local associations – where quite a lot of goodwill has already been squandered: executives in Newmarket-Aurora and Ottawa West-Nepean even quit in protest last year over allegations of ballot-stuffing, while executives quit in Kanata-Carleton last summer to protest their leader’s steering of the party to the “political centre.” To that end, the new leadership of Progressive Conservatives are inheriting candidates approved under the world-renowned judgement of Brown, Dykstra etc. Any number of them could be political grenades in the lead up to the election and the tainted nomination process will almost surely make the bomb squad’s job far more difficult.

Another ticking time bomb waiting to explode is the party’s decision to release its election platform, the “People’s Guarantee,” a whole six months early. The People’s Guarantee was a political chimera – a mix of Harperite tax credits and Trudeauite tax cuts and ‘modest deficits’ – that generally endorsed the main planks of the same incumbent Liberal regime that it accused of mismanagement and self-enrichment. Sure, it seemed like a good idea at the time: the Wynne Liberals were goading Brown as a ‘man without a plan’ and an early release of a platform invoked Mike Harris’ Common-Sense Revolution (which was released a year early.) But without Brown, the party has left itself with a “guarantee” it cannot guarantee. It’s far from certain that the party roots or its future leader approve of the policy direction that Brown was leading the party towards. But resetting the party’s agenda and its messaging after a “people’s guarantee” has already been made by the party’s former leader could be a source of both ridicule and distrust.

Perhaps most damaging of all, however, was the mismatched decisions of caucus and the party executive in response to Brown’s resignation. While the party executive called for an open leadership convention at the end of March to decide Brown’s replacement. The caucus chose Vic Fedeli, a previously failed leadership candidate, to replace Brown – despite Fedeli announcing he hoped to represent the Tories in the next provincial election. Interim leaders generally rule themselves out from standing in a leadership convention. As of consequence, Fedeli, chosen by a caucus vote, had all the name recognition and authority afforded to an interim leader without any of the responsibility to remain neutral. The party had two perfectly serviceable options: run an open convention with a neutral interim leader or skip the convention and appoint a caucus-chosen leader. In trying to choose the best of both worlds, the Progressive Conservatives have handed a smoking gun to the righteous crusaders of the party’s anti-establishment.

Tuesday, Vic Fedeli announced he had (against his prior judgement) decided not to enter the race to select a permanent leader. But it was too late, the damage had been done. Nothing could have been more self-destructive than giving a license to Doug Ford to grandstand, as he did this Monday in announcing his candidacy for the Progressive Conservatives’ leadership from his mother’s Etobicoke basement:

“I can’t watch the party I love fall into the hands of the elites,” says Doug Ford, presumably attacking the caucus selection of Fedeli without naming him explictly in his speech. “[…] The elites of this party, the ones who have shut out the grassroots, do not want me in this race.”

Doug Ford is a real, credible contender for the leadership – his run here is far more plausible than his chances in the Toronto mayoralty race against Tory.  As TVO‘s John Michael McGrath has noted, Ford’s political base is larger or at least comparable to the Tory membership (330,610 votes in the 2014 mayoralty race versus 200,000 PC members) and arguably more diverse. An experienced political salesman, Ford has the requisite chops to recruit and attract new memberships. Worse still for the party brass, Ford has a plausible case to make to the grassroots that local associations have been railroaded to push a centrism that compromises their sensibilities. Certainly, there’s a market out there for the angry populism that Ford will sell to Ontarians. Like a bull in a china shop, he stands to do a lot of damage within his own party,  attacking the legitimacy of Vic Fedeli and Caroline Mulroney (a popular contender) as a ‘backroom boy’ and a ‘centrist plutocrat,’ respectively.

UPDATE (1/31):  Alex Nuttall, Barrie MP (Conservative), has slammed Brown’s departure as an “inside job” and decried Vic Fedeli’s decision to open an investigation into the authenticity of the PC paid membership (200K voters) as “elitist” and racial targetting. Once more the party has found itself in a position where repairing problems left from Brown’s time means exposing the party executive to accusations of anti-democratic elitism.

If (god-forbid) Ford wins, the Ontario PCs will be heading into the election with a goofy rabble-rouser at the helm. If he loses, their eventual leader will be damaged goods.

It’s hard to imagine a scenario where the party in the span of only a month after the convention is able to successfully unite around one credible figure without hard feelings, distrust, and a certain palpable radioactivity. An open question that will rightly haunt the Progressive Conservatives going into the provincial election is the question of competence. Wynne may be not be a popular premier in Ontario but “incompetent” is not an accurate description of her qualities. With their rivals presently wandering the political landscape like decapitated (yet ambulatory) poultry, voters will have to ask themselves this June whether the poultry is ultimately up to the job.