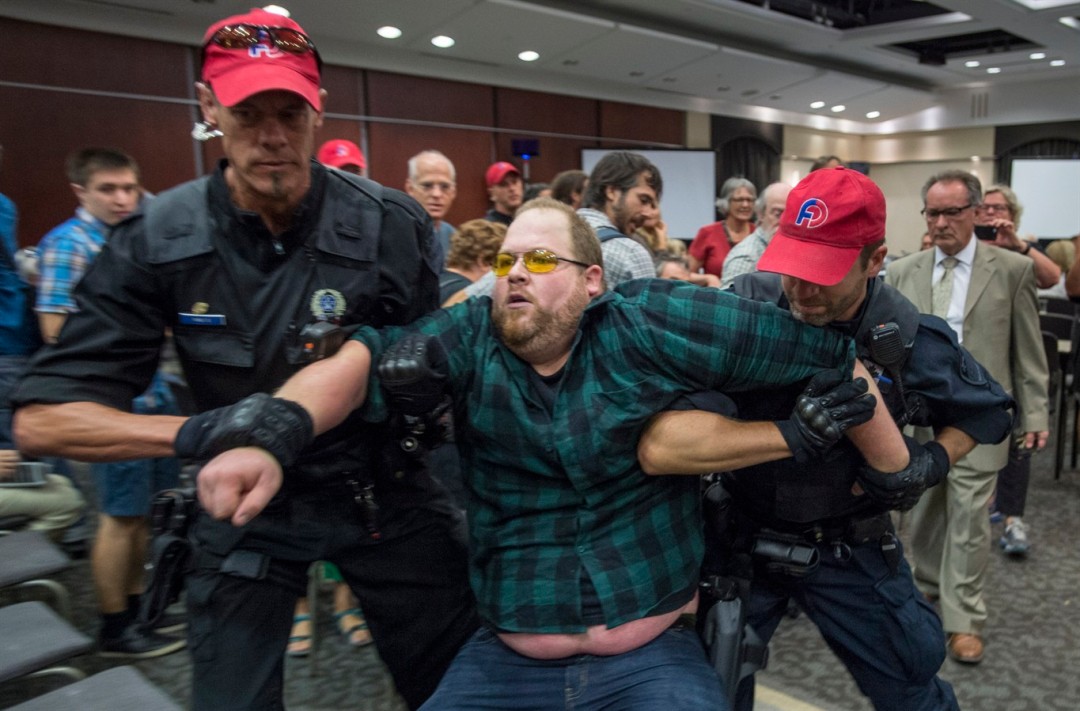 The National Energy Board’s (NEB) plan of holding a week-long environmental assessment hearing in Montreal on the subject of building a 4,500-kilometre pipeline stretching from Alberta to New Brunswick came to a forceful halt on Tuesday.

The NEB suspended hearings indefinitely because of the “violent disruption on the first day of the proceedings and ongoing security concerns.” Despite an apparent heavy police presence, a small contingent of environmental activists managed to enter the room and disturb the proceedings where the three-member panel of Energy Board commissioners sat. One of the protesters even rushed towards their table, nearly knocking it over.

Not unlike the upcoming public consultations on reforming Canada’s electoral system, the $15.7-billion TransCanada Energy East pipeline project may test Prime Minister Trudeau’s ability to maintain national unity in the face of stark regional and ideological differences. Out of these differences, a mutual desire for security, preservation, and growth unites groups both in support of and opposed to Energy East.

In essence, the train-wrecked hearings were over before they began. Montreal Mayor Denis Coderre, scheduled as the first speaker, walked out of the room and derided the event as a “circus” in response to the surprising albeit rather brief episode of direct action obstructionism on the part of committed activists.

The ruckus provided the optimal conditions for Coderre, a vocal opponent of the pipeline project, to dismiss the hearings. Even though he disagreed with their methods, Coderre and the protesters both agree that the NEB, which is supposed to be an independent institution having quasi-judicial powers, has struggled if not failed to maintain its appearance as an impartial institution in the eyes of many Canadians.

For this reason, the NEB will only resume its public activities once it deals with the complaints against two of its three board members — Jacques Gauthier and Lyne Mercier — who met privately with former Quebec premier Jean Charest in January 2015 at the Montreal offices of his law firm, McCarthy Tétrault. At the time, Charest had acted as a consultant for the Calgary-based pipeline operator TransCanada Corp., yet he technically was not registered as a lobbyist. Not only do NEB rules require all discussions with board members to be conducted in public according to a fair and transparent process, but the NEB lied in July 2016 when it denied that the meeting with Charest ever took place.

When investigative journalists filed access to information requests and discovered the truth, the NEB then admitted to providing false and misleading information to the public. Even more damaging to the NEB’s reputation was the fact that while eventually admitting that the meeting with Charest did take place, it then claimed that the Energy East project was not discussed at all. Which was false. It was. In fact, it was one the main reasons the meeting even took place, according to a letter sent from the NEB to Charest’s office.

Naturally, the National Post is ready to condemn Coderre for “political gamesmanship”, and even if such a charge is accurate, the mayor’s shrewd decision to disengage from the already controversial hearings allows him to reap the benefits of a populist alliance with First Nations groups and environmental groups such as Équiterre, Stratégie Énergétiques, and the Association Québécoise de la Lutte contre la Pollution Atmosphérique, all of whom oppose the Energy East pipeline project. By skirting around this explosive issue and not allowing it to disrupt his work as mayor, Coderre is throwing what is shaping up to be a hot and primed political grenade through the top windows of Langevin Block.

Trudeau now finds himself entangled in one the most challenging situations yet as prime minister. Pressure is mounting for him to intervene in the NEB’s activities to ensure that it operates in a neutral and fair manner. But political intervention in a quasi-judicial process may not be a wise decision, especially given Trudeau has staked out his approach to energy projects as “hands off” and agnostic. However, failing to intervene could hurt the credibility of his administration and the whole consultation process.

Napoleon Bonaparte once said “I love power…But it is as an artist that I love it. I love it as a musician loves his violin, to draw out its sounds and chords and harmonies.” For Coderre, political expediency has led him to play the song his constituents want to hear. But Trudeau’s audience is the entire country, a country whose diverse peoples, languages, and regions make reaching a consensus on any ‘national’ issue an up-hill battle.

While the prime minister supports the oil and pipeline industry’s need to ship their products across the country, the Liberals have taken a cautious position by buttressing their support for pipelines with concern for their safety in terms of their construction and operation. The balance that Trudeau has sought to establish between the oil industry (the West) and green activists (who maintain a strong presence in Quebec), could easily be linked to the age-old narrative that Albertans and Quebecers have different interests and concerns. There are many problems with this regionalist narrative, but a major one is that it ignores First Nations.

Early this August, the NEB held hearings in Saint John, New Brunswick, which, unlike the chaotic Montreal hearings, allowed First Nations peoples to express their thoughts about the pipeline project. George Ginnish, chief of Mi’gmawe’l Tplu’tagnn Inc. and the chief of Eel Ground First Nation argued that “the Energy East pipeline will cross through our unceded Mi’qmaq traditional lands, which we hold Aboriginal title to. Thus the project will require our consent.” Ginnish then affirmed that “our relationship with the land, waters and resources is the foundation of our identity as First Nations people.” While the NEB is expected to submit its report by March 2018, Trudeau has promised to hold separate consultations with First Nations groups, so that their voice plays a key role in the federal cabinet’s final decision on how to proceed with the proposed pipeline.

It is too early judge whether the harmonious tune Canadians have been humming since Trudeau’s rise to power degenerates into a long-term shouting match between provinces, First Nations groups, and oil companies, but what is crucial is that for this and any public hearings to succeed, there must be trust and dialogue.

What unites all sides is a concern for safety. First Nations want their lands to be safe from exploitation. Provinces like Quebec want to secure their sovereignty. The federal government wants to ensure that oil can be transported safely. The oil and pipeline industries want to draw a profit by accessing and transporting energy in a secure manner. The NEB wants its hearings to be a safe space where groups can freely voice their concerns without the fear of having their lives put in danger.

The desire for safety is intimately tied to preservation and growth. We may as a society disagree on how we value safety, but ensuring the dignity of everyone requires that we, at the very minimum, respect others, even if we disagree. For this reason, the storming of hearings ought not be a model to follow for others. The intention may have been noble in calling the NEB’s credibility into question, but once you threaten the security of others, you yourself also lose credibility.