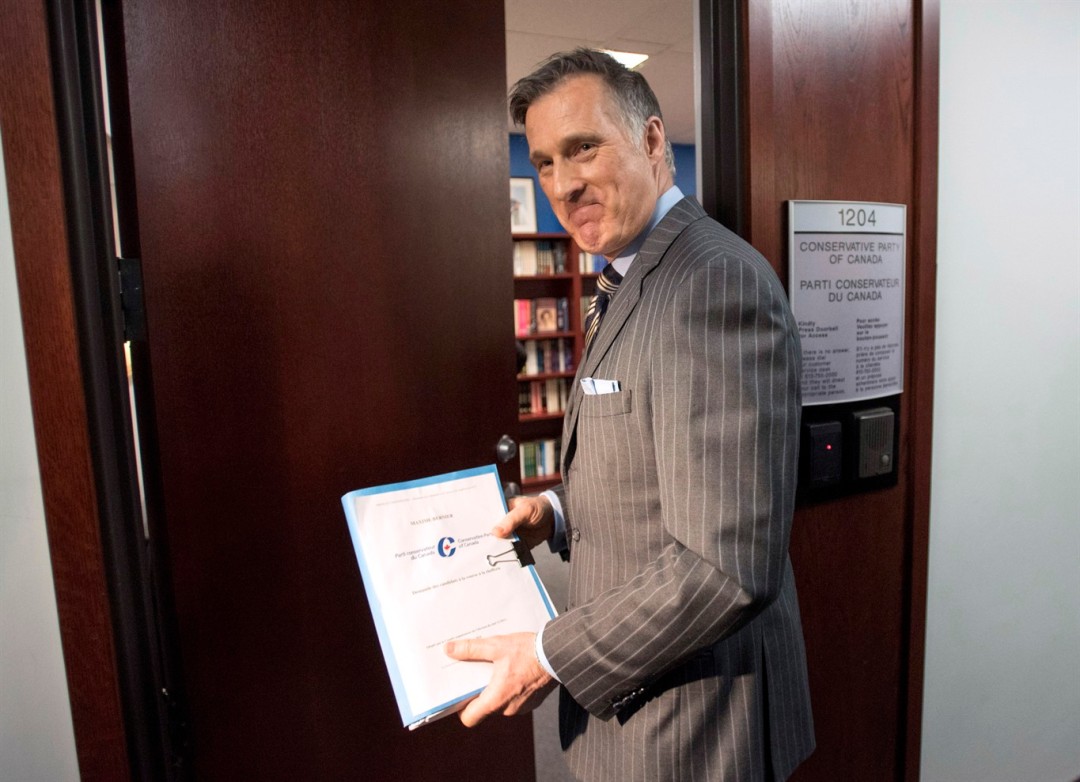 Hurrah. We’ve survived. The end is upon us, err – the end of the Conservative leadership race to replace Stephen Harper, this is – not the end of the world (notwithstanding a Trump-induced nuclear apocalypse.) Thought to be the frontrunner and the ‘smart money’ presumptive, Maxime Bernier’s candidacy is still far from a done deal, however.

The result of the vote itself will remain elusive, despite the mass of educated guesses and data analytics, until this Saturday when the new leader is revealed to an anxious gathering at the Toronto Congress Centre. Complicating any attempt at predicting the race is its electoral process: with fourteen candidates on a ranked ballot vying for the support of Conservative members in the country’s 338 riding associations (each worth – regardless of the size of the riding associations – one hundred points), it’s not inconceivable the race could be decided by the second, third and fourth choices of the handful of Tories in ‘zombie’ ridings throughout Montreal and Gaspé.

It’s in that sense that the byzantine nature of the race demands that candidates, if they hope to be victorious, have to hustle – glad handing some of the most obscure Conservative riding associations in the country – while muscling in for media attention amongst a ludicrously crowded field. To compete for headlines in such a oxygen-starved media environment with the blowhard-in-chief, reality television star Kevin O’Leary – that is, prior to his sudden and uncharacteristically capitulatory departure from the race (“I didn’t have a clear path“) – candidates were forced to present half-baked unconstitutional musings of their own as a contrast to O’Leary’s outlandish “policy” ideas. These proposals, O’Leary’s especially, were “unveiled” across the stretch of the campaign with all the rigor and thoroughness you would expect of someone coming up with an “idea” on the toilet without any research, then announcing them as campaign promises that very morning over Twitter. (That’s basically what happened isn’t it?)

For instance – in an attempt to match O’Leary’s bogus plans to get oil to tidewater come hell or high water via a referendum – Kellie Leitch and Lisa Raitt both laid out proposals for railroading Energy East worthy of an entire chapter of a Peter Russell textbook. Leitch suggests the creation of a cartoonish special “task-force” (part CSIS, part RCMP) to surveil and haggle environmentalists, while Raitt brain-vomited the notion earlier this month of deploying Canada’s notwithstanding clause to override consultation rights with regards to the creation of the Energy East project.

It should be said, it’s hardly clear how Section 33 would apply to the National Energy Board – and I for one would posit it’s the legal impossibility of what it is Raitt is advocating that has emboldened her to grandstand over it (“I know it’s a risk and I know I will never get elected again, but you will have a pipeline,” she’s quoted as telling Nova Scotians,) knowing full well it’s impossible and as vacuous a pledge as putrid swamp gas.

Perhaps sensing competition in the department of failing to consult indigenous peoples, Leitch also advocates the unilateral abolishment of the Indian Act, while throwing in the abolishment of the CBC in for good measure (a cruel joke for any of her constituents who have tried to find something west of Blue Mountain on the radio that isn’t bluegrass or CBC Radio 2) – because why not?

Other candidates have been a bit tamer in meeting their “crazy quota.” Frontrunner (vaguely) Andrew Scheer’s quaint proposal to defund universities that don’t “protect free speech” is an amusing curiosity in part because it’s left unexplained how one ought to define “free speech” and how universities are expected to commit on behalf of student councils, federations and groups independent of their Board of Governors. The Ambrose Bierce in me fears Scheer might define free speech as a privileged soapbox for whatever he wants to hear (for which talk radio already exists.)

Campus freedom is a hot topic among Conservatives who – unfamiliar with how universities work – appear to believe a campus venue is the only exchange and communication of ideas that students receive.

Indeed, for every Tory worried UoT professor Jordan Peterson isn’t getting his fair share of airtime to question the legitimacy of transpeople, there’s another person thoroughly sick and tired of hearing, reading, and re-reading Peterson’s “pet peeve” with the universe repeated ad nauseam every slow news week on radio, television and in newspaper columns across the country. When, for example, the National Post‘s Christie Blatchford had her scheduled speech cancelled at the University of Waterloo, it was left suspiciously unreported that students there (at least at that time) received free copies of the National Post. The cancellation of a speech hardly cancelled Blatchford’s presence in Waterloo: her regular op-eds, usually defending police brutality and sexual assault acquittals, are always available – in fact, plentiful – on campus.

The challenge for Scheer, if victorious, will be presenting such an oddball proposal to the wider public (not nearly as “up” on their campus issues), which is the inverse challenge that would plague his competitor, Michael Chong.  Chong, who supports carbon taxes as sensible “conservative” market-based policy, would, upon winning the leadership have to try to sell his own policy to a skeptical if not outraged base – a problem that Ontario PC leader Patrick Brown might also might face if he were to become premier next year.

But none of these plans, none of them, really quite equate to the wholesale “reform” that Maxime Bernier, the presumptive frontrunner, has promised Canadians. While US President Donald Trump, rather spontaneously has forced the shock NAFTA renegotiation proceedings this month, it seems almost farcical the Conservatives are on the verge of electing one of the few possible candidates who would be uniquely incapable of criticizing the federal government and the product of its NAFTA renegotiation. Most opposition leaders would use the opportunity to chide the prime minister for “giving in” to Washington too much, whereas Bernier is already on the record supporting Donald Trump’s position, even welcoming his attacks on Canadian dairy producers.

It’s not hard to imagine how an election between Bernier and Trudeau might play out. While a Leitch-Trudeau election would likely be fought along the familiar issue of immigration and identity (a rehash, in that sense, of the 2015 federal election), the Bernier federal campaign would be stuck in the weeds, defending its extreme positions on supply management and health and social transfers against accusations that his proposals essentially amount to an attack on time-honoured Canadian institutions: chief among them, agriculture and healthcare. For his part, Bernier, a libertarian, proposes phasing out supply management and abolishing health transfers to provinces.

Such a campaign would give the Trudeau Liberals an unprecedented opportunity to rewrite the electoral map and challenge the enduring Tory dominance in Southwestern Ontario, especially farm country, where a francophone Bernier – who could reasonably be seen as “anti-farmer-” will appear as foreign in ideology as an extraterrestrial from Mars.

When the challenge facing Canada’s Conservatives is to broaden the appeal of its party and its brand, it seems a cruel fate that a new leader’s inheritance is set to be the darkest manifestations of the party faithful’s philosophy, a twisted play on what economists call the “winner’s curse.” But that is by and large the dilemma that the new leader, whoever that may be, will face. Once the Conservative leader is chosen, the long process of coming to terms with their campaign policy will begin. In Bernier’s case, that’ll mean choosing whether to moderate his own vision to suit the public ethos or building up support within his own party for his bold agenda sans moderation. Promises may be dropped, they may adapted with events, or they may be adopted full stop as prime time policy, but regardless of how the future leader decides to proceeds with these promises, they will remain baggage for some time – deeply complicating their leadership.