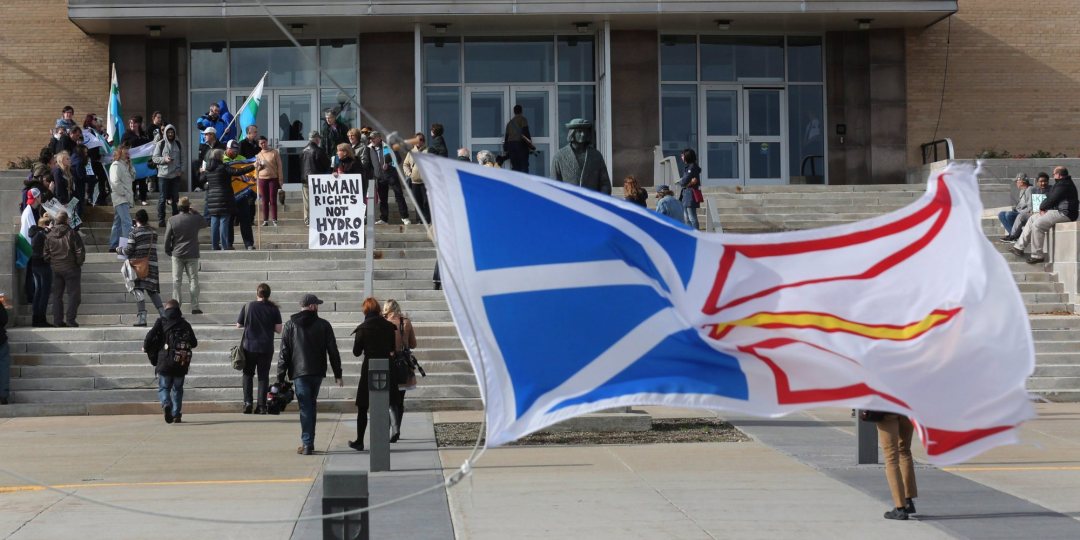 On Muskrat Falls, province traces a path to reconciliation

In a week where agreements have proved rare and elusive, one appears to have been tentatively reached in the Muskrat Falls hydroelectric dispute between indigenous peoples and Newfoundland and Labrador. Protesters in Labrador and in Ottawa, through standoffs and hunger strikes, had been raising public attention around the potential environment impact of the troubled project.

The dispute has surrounded a dangerous neurotoxin, methylmercury, present naturally in the trees and soil. Flooding the reservoir without first clearing the area of all vegetation, trees and soil could have released the methylmercury deposits, in effect poisoning fish downstream, a culturally and materially important source of food for the local Inuit at Lake Melville. Nalcor Energy had agreed to clear the area of its trees, but not the soil, precipitating the most recent standoff. Liberal MP Nick Whalen made matters worse, however, with his boneheaded suggestion that local Inuit ought to just “eat less fish” if high levels of methylmercury were found. He’s since apologized for the remark, calling it, “insensitive –” prompting a chorus of exacerbated eyerolls across social media.

During the height of the protests, the decision was made to delay work on the project, leaving more than a thousand workers out of work; workers who are still stuck in limbo with the province’s hopes to extend further environmental testing. “Our members were very anxious,” explains trades council director Darin King, “then when the decision was made by Nalcor and the police to close the site and move people home, there was a lot of anxiousness, a lot of people up 24 hours.” King sees a light at the end of the tunnel now, however. “Everyone now are just happy that there were no injuries and nothing went wrong through this process, and now, I think people are just anxious to get back to work.”

Nunatsiavut President Johannes Lampe sent a message to the protest camp at Muskrat Falls: “go home,” signifying that a deal had been reached between the local Inuit, Nalcor and Newfoundland and Labrador. It’s a breakthrough worth appreciating in a world where just this past week, armoured humvees were quite literally roaming the grasslands of North Dakota to stomp out protests against the Dakota Access oil pipeline, delivering the full and thunderous force of the US National Guard. A question worth asking is, what separates breakdowns in communication like what has unfolded in North Dakota and compromises like what’s been reached in Muskrat Falls? Finding a path to reconciliation for Canada with its indigenous peoples requires an answer.

Things haven’t been peachy on the energy file here in Canada either. Trudeau’s pledge to First Nations, that it would “enact the recommendations of the Truth and Reconciliation Commission,” starting with the “implementation of the United Nations Declaration on the Rights of Indigenous Peoples,” has proven to be, according to his own administration’s admission, complicated at best.

Sure, Ottawa was quick to drop its ‘Objector’ status in the UN to the UNDIP, accepting a standing ovation at the UN for offering its “unqualified support” for the UNDIP – except, one problem: it’s most certainly a qualified support. Justice Minister Jody Wilson-Raybould, in talking the “hard and sometimes painful truth” (rather than “real change”), explained later this year that the UNDIP could not be implemented verbatim but would first have to be dismantled, then implemented in a piecemeal manner instead.

One project which an enforced UNDIP could have jeopardized is Site C Dam, a multibillion dollar hydroelectric project in Peace River Valley, BC that was recently given the go ahead by the Trudeau government.

A strew of interprovincial politics at play, West Moberly and Prophet River First Nations have now taken the case federally, saying that the valley infringes on their constitutionally protected rights; even Amnesty International has gotten involved, pronouncing it a national human rights issue in their report, The Point of No Return. Ultimately, the Site C project received federal and provincial approval despite outstanding Aboriginal and Treaty rights claims yet to be resolved.

Countering critics and whistleblowers, pro-oil First Nations including Ken Coates, director of the International Centre for Northern Governance and Development at the University of Saskatchewan has organized a conference that disputes this, finding that there is a “huge increase in aboriginal entrepreneurship that is largely tied to the resource sector;” going as far as to explain how First Nations have participated in the resource economy in a creative and innovative new manner.

Jessica McDonald, BC Hydro president and CEO also claims that they have consulted meaningfully with First Nations in the area since 2007 and are continuing to as they move forward with the construction of the dam.

Whereas, Harry Swain, chair of the Canadian Environmental Assessment Agency’s review panel in 2015, argued the environmental approval process had been rushed – as did scientists from the Royal Society of Canada – finding there were better alternatives to the Site C dam. BC Hydro’s community relations manager even went as far as to say the energy gained from Site C wouldn’t be needed for some 20 to 40 years.

But while the prime minister has been using his words gracefully; it is often not the words we use so much as the actions we take that come to speak for us. His approval for such a hotly contested hydroelectric project has authored a new story, a story about a leader that forsakes his promises for change and accepts the stamping out of indigenous concerns as business as usual. One has to ask what may be the cost of this stubborn push forward for everyone – economically, ecologically, politically, socially – against national outcry? Costs for Ottawa, for local First Nations, even for British Columbia.

Critics have called Site C Dam, Trudeau’s first broken promise to First Nations people; especially in announcing the UNDIP can’t be adopted into tangible legislation for years to come. A shortfall in the politics of inclusion, a hasty decision moving forward, while a historical legacy of colonization and environmental degradation continues to loom.

In times like these, Marilyn Waring’s voice echoes in my head; an economist, Waring examined different concepts of ‘progress’ advocating for many diverse voices to be heard; one where big environmental ‘cleanups’ and destruction aren’t driven by monetary concerns or material value and growth. The rare, fleeting kind of genuine agreement that has been reached these past few days in Muskrat Falls is a model of patience and sincerity worth learning from; it’s not simply a matter of listening to the concerns of those affected – although that’s a start – it’s a matter of reaching towards a mutual understanding. It’s hard work, consensus is never easy, and it’s a challenge that never stops.