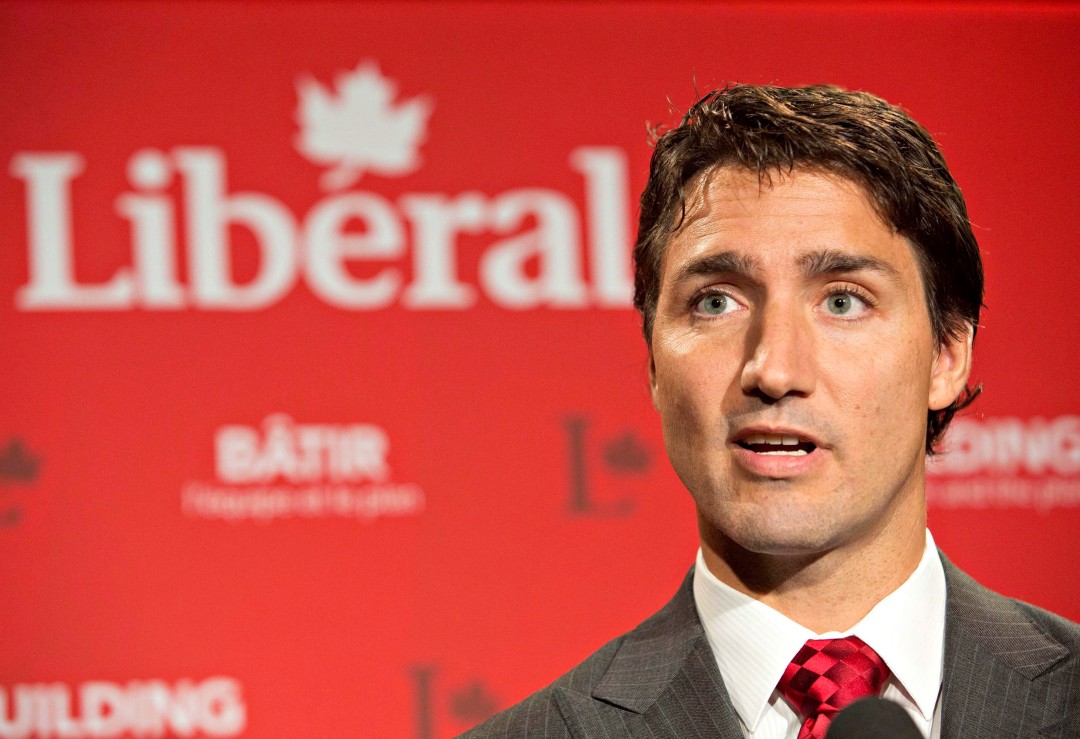 The Trudeau Ethos: What a year in office says about his administration

It was a year ago this week: Justin Trudeau, smiling blissfully, walks through the kitchen of the opulent Queen Elizabeth hotel in Montreal. His victory speech is just minutes away now but first he’s to receive his first (and most intimate) of the night’s many standing ovations: the kitchen crew, forming lines on both sides of their new prime minister-designate, begin to cheer. “Sunny ways,” Trudeau would soon tell Canada, delivering it with the voice of a rock star at the end of a three month tour, “Sunny ways, my friends. This is what positive politics can do.” It was a poetic nod to Canada’s first French Canadian prime minister, Wilfrid Laurier, who first coined the phrase, as well as a testament to the positive campaign that Trudeau and his wife, Sophie Grégoire Trudeau had encouraged.

The phrase, “Sunny ways” comes from the time, Laurier, then official opposition leader, used one of Aesop’s fables, The Wind and the Sun, as a metaphor for the Conservatives’ failure to resolve the hot button issue of Catholic schools in Manitoba.

Laurier, whose gentle pragmatism has served for more than a century as a textbook for running the country, suggested blowing a cold, furious wind toward Manitoba had made its premier cling to his coat more, whereas a warm ray of sunshine would persuade him more easily to abandon it. He ultimately ended the Manitoba school question with a provincial compromise that protected Catholic and French education in Manitoba, albeit with significant limitations. Today, there’s no prime minister, including — perhaps surprisingly — Stephen Harper, who would go without attributing Laurier as a source of inspiration: seek compromises and unite our family of provinces, embracing open borders and free trade. Govern from the centre, govern from the heart.

On the climate change file, Trudeau has struck his own ray of sunshine this October; choosing the path of least resistance to coordinate the provinces’ efforts to reduce their greenhouse gas emissions. The government had made its intentions clear since the Vancouver Declaration that it intended to price carbon to bring the country’s emissions in line with its targets through a market-based approach.

But the masterstroke in the plan as it’s been laid was to have all revenue generated from a carbon price transferred directly to the provinces. Along with an allowance for program equivalencies, this plan effectively undercut complaints from pollution holdouts — Saskatchewan especially — since any money raised from a federal carbon tax could very well be used to reduce income taxes on households, compensating for any tax burden on consumers. That’s where the “sunny ways” comes in.

Rather than a straightforward ultimatum, Trudeau’s government has artfully given the provinces, an offer that’s easy to condemn, but hard to refuse: unconditional money. The provinces are infamous for biting the hand that feeds them, but refusing money outright would be, suffice to say, deeply out of character.

These past few months, although Trudeau’s government has been accused of being ‘indecisive’ and ‘dithering’, especially in its use of consultations and pre-consultations, what we’ve seen from his administration is strategic patience — a political rarity these days — a determination to make the right decisions after careful contemplation at the right time. That thought certainly played out in its deft handling of carbon pricing; threatening a tax of all things while retaining the broad support of both voters and premiers. A feat not for amateurs in any level of government.

You can accuse Trudeau of being indecisive, but it’s a charge that’s far from fair; not when his administration in such a short time have already defined such a coherent sense of what he stands for and what values you can expect his government to proceed with.

Certainly this year we’ve witnessed a government ready to make strides where it can on its full agenda, with some of its biggest accomplishments coming in areas normally considered strengths for Conservatives: finance, defense and democratic reform. The first of its victories coming near the end of February when it reached its target of resettling some 25,000 Syrian refugees into Canada. Indeed, it’s been so successful it may very well be forgotten that the public was largely opposed to the resettlement program when it first began; the Liberals made a significant breakthrough in reversing our country’s sentiments toward refugees and migrants in their time of need.

Despite being a political newbie, Morneau has also proven himself a capable finance minister, managing an intergovernmental détente over pension reform that will extend the support future retirees will receive, while also overseeing the implementation of his government’s biggest policy innovation, a means-tested child benefit scheme. Meanwhile, Sajjan, Canada’s “badass” defense minister, took what was perceived as the biggest weakness of the Liberal party platform, its commitment to withdraw our CF-18s from Syria, and managed to spin it into an enduring success: an intensified Syrian mission, training the very Kurdish fighters who — as you read this paragraph — are currently participating in a pivotal invasion of Mosul against ISIL.

And perhaps the promise kept that will have the longest institutional impact on Canada, the appointment of independent senators, has begun to leave its mark on parliament as we saw earlier this year with the assisted suicide debate. It’s only been a year and yet it doesn’t feel premature to sum up the Trudeau ethos. That’s a testament to just how clear he and his cabinet have defined their intentions. The Trudeau ethos, the sum of his convictions, his very mindset, is counter-zeitgeist. Striking a foil, deep and passionately, to the bully politics of anti-trade, anti-immigration nationalists in Britain and the United States, Trudeau has cut himself a well fitted suit from the same cloth as our neighbor’s outgoing president, Barack Obama and London mayor, Sadiq Khan.

This new liberalism, a transnational consensus, is happily married to the economists of its day: the IMF, Financial Times, the Economist. ‘Government by Bloomberg.’ It’s a way of governing, technocracy with heart, that’s not ashamed to take the advice of experts regardless of the many epithets — accusations of ‘elitism’ — hurled their direction.

The schoolboy explanation of the latter is simple enough: this ethos can be thought of as supported by three distinct — albeit related — columns. Broadly speaking, the priorities of the new government are rooted in equality, science and globalization.

Science, in the sense that its administration celebrates technology and innovation as a path forward for economic growth, accepts climate change science, and governs from a rigorous evidence-based policymaking regime. Globalization, in the sense that Trudeau and his cabinet champions an open society with a relatively free movement of trade and people, rather than demonizing foreign nationals as the source of the country’s economic and social difficulties. And as for equality… in a world where Donald Trump has single-handedly killed the “Do we still need feminism?” think piece, in a country that’s grappling with islamophobia on its political margins while coming to a consensus on same-sex marriage and gay rights, Trudeau’s sense of equality is informed by its feminism, its relentless optimism and, above all else, its openness to others.

It’s a series of positions which fits squarely with the hopes of millennials, a generation that’s rejected the nationalism of their parents — from Scottish independence to the migrant crisis to Brexit to Trump — now kingmakers of our latest government, an administration they’ve held in high regard since rising to power last fall. It is no coincidence, not when their ambitions are the same, that Trudeau’s administration and the nation’s youth are intimately linked as with Obama’s.

The Liberals were brought to power with the help of millennial voters, but the survival of their government will depend on their support come next election and beyond. They will play jury to the prime minister’s long term commitments, the most ambitious reform he’s promised: his efforts to fight climate change and renew the country’s relationship with its First Nations and Inuit peoples.

Guessing what the future holds for the Trudeau administration — what promises are important to keep, what promises will make or break him — is a fool’s errand. But that won’t stop us from trying. The suggestions from some that slower-than-expected growth rates might tar the government’s popularity, for example, is based off a historian’s view that the economic “fundamentals” shape an incumbent’s popularity in a strongly correlative and predictable manner.

But we live in a strange time in economics, where economic forecasts have regularly overestimated growth post-meltdown; and in that sense, voters have no reason not to regard slow growth as the new normal. The success of Trudeau’s economic plan, deficit-spending to boost economic growth, therefore may not be as important to his re-election chances as meeting the expectations that the Liberals have set for themselves in terms of policy reform. The prime minister will need voters to feel they’ve gotten what they voted for. That what they’ve received over his time in office has been “real change,” as promised. In this regard, so far, so good.

3 thoughts on “The Trudeau Ethos: What a year in office says about his administration”