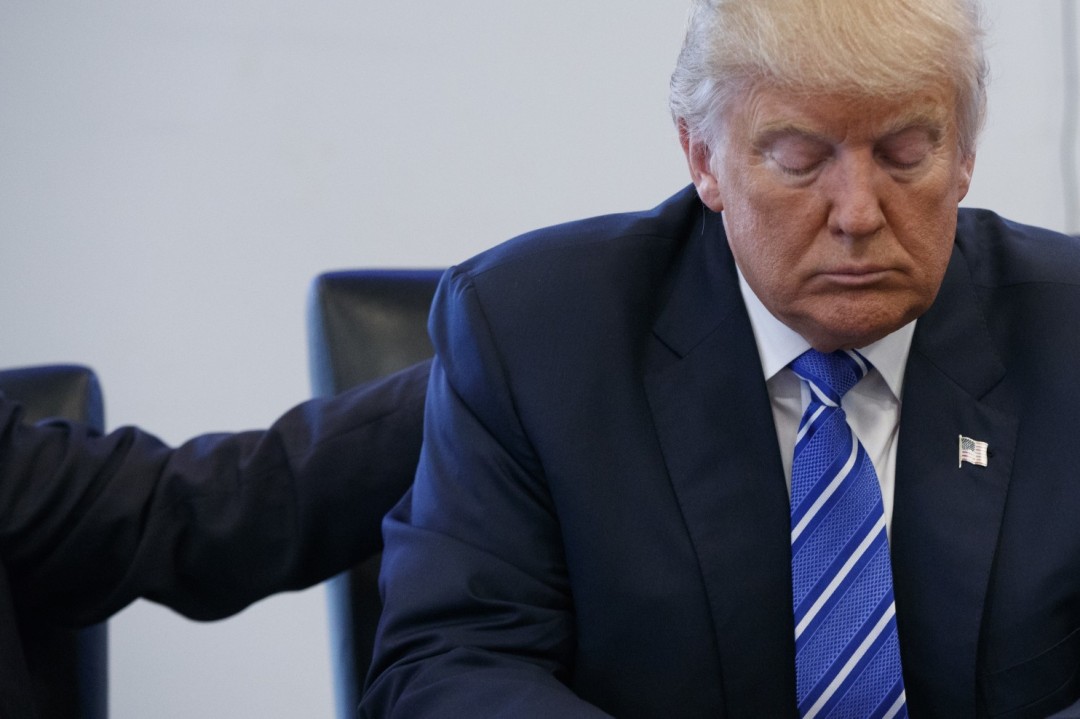 The unmaking of a president

As I sip my morning coffee, my aunt says, not “good morning” or ask “how did you sleep?” – no, the first words I heard over breakfast were, “Could Donald Trump resign from the race? I was up last night wondering if he could just… you know…give up.”

Oh, what forty eight hours can mean in politics.

To use his own words, these past few days have been a disaster for the Republican presidential nominee. Disaster! Terrible. So terrible, such a catastrophe.

FiveThirtyEight poll analyst Nate Silver even published “The Bottom Could Fall Out For Trump,” suggesting at that point in the race, a “Clinton landslide [was] no more far-fetched than a Trump victory.”

It’s been a free-fall of his own making, especially regarding his respect and treatment of women. Remarks he made over a hot mic for Access Hollywood have resurfaced, showing him using explicit language, discussing groping and harassing women – “grab that p****y,” and “move on her like a b****” (whatever the hell that’s supposed to mean) – remarks which call into question, among everything, his respect, temperament, and judgment. On the same day, a tape from the Howard Stern show emerged with Donald Trump saying it was okay to call his daughter Ivanka, “a piece of ass,” and that men ought to dump women when they turn 35 – or as he calls it, “check out time.”

His attempts to respond to these revelations have been an outrageous failure. He dismissed his remarks as “locker room” banter, as he did once again multiple times during last night’s debate. Later saying, with not a shed of self-awareness that “nobody has more respect for women than [he does] –” nobody, there’s no one on the planet, not even women, who have as much respect for women as Donald “I did try and f*** her” Trump. He also made a half-baked “sorry if you were offended” non-apology. And then tried to deflect by raising allegations against Hilary Clinton’s husband.

During the latest debate, Trump, pointedly tried to direct the discussion to “much more important things and much bigger things!” – towards, that is, quite literally anything other than what a clownish pig he’s been over the years to women, like, for example, how he’ll “knock the hell out of ISIS.”

An invitation from Donald Trump to discuss his foreign policy in front of a national audience is a clear indication of just how much trouble his campaign is in right now, given said policy is nothing but uninformed, self-conflicting verbal bile. For starters, he openly contradicted his running mate Mike Pence on Syria in saying “He and I haven’t spoken and I disagree,” while suggesting quite outrageously – if I’ve interpreted his nonsense of a spiel correctly – that America should abandon Aleppo and fight ISIL ‘alongside’ the Assad regime, Iran and Russia, which demonstrates a basic misunderstanding of the Syrian civil war: Russia and the Syrian government are more interested in engaging the Syrian rebels and propping up Assad than fighting ISIL.

America’s allies in the fight against ISIL on the ground are Canadian-trained Kurdish militants, Sunni and Shia fighters, Iraq and (questionably) Turkey who’ve scored a series of victories against ISIL over the past few months and are now preparing for what could be a pivotal liberation of Mosul, the last urban centre held by ISIL in Iraq.

In discussing national security, the Republican leader also made a number of strange remarks, some narcissistic, others delusional (which mirrored his comment from the last debate when he said Clinton had been “fighting ISIS her entire adult life.”) He first claimed Russia was “new in terms of nuclear” (but in fact the Soviets were a nuclear superpower by 1949 – which was kinda the point of the nuclear arms race – how did Donald Trump miss that?) and then went on a tangent to brag that he had “almost 25 million” Twitter followers (“I’m not unproud of it to be honest with you,” says Trump smugly), asserting that his two hours worth of bizarrely vindictive tweets at 3am were, rather than a desperate call for psychiatric help, evidence that his temperament and alertness are presidential.

Certainly, the manner of these unendorsements have been criticized on social media for showing a prior obliviousness to Donald Trump’s behaviour against women, as if they hadn’t known he was a terrible candidate before they had endorsed him.

However, that criticism – undeserved and unfair to those involved – fails to appreciate the politics and strategy at play. Condemning and disavowing a candidate you haven’t endorsed is the equivalent of farting into a microphone. To gut a candidate like a fish –  as these Republican insiders have – requires a reluctant endorsement and spectacular timing in withdrawing said support. Any Republican truly interested in killing the chances of a Donald Trump’s presidency should have endorsed him earlier this year as they did.

But the greatest undoing of Trump’s presidential run has come, not from senators or representatives, but Trump himself. Peeling the celebrity off his wrinkled spray tanned hide – the very illiteracy surrounding his profound incompetence – these debates have revealed his sad nature for a national audience.

Trump demonstrated his ignorance once again last night, his ignorance of people in calling Syrian refugees, “murderers” – regular families running from terror and war crimes that Trump (in supporting Assad and Russia) is apparently ‘cool with’ – and his ignorance of the law and the constitution in calling for a special inquisition of his opponent, Hillary Clinton. Clinton may not have got the ‘zingers’ in she had last debate, but her performance this debate was even more poised and polished, it was a delivery of her message that was even more personal, more compelling and inviting. You felt you could envision her as president – a steady hand in the White House.

It’s truly a sad state of affairs when the highlight of the night for Trump, his only real ‘zinger’, was as a presidential nominee bragging he would “jail” his opponent if elected. That indictment, echoing Nixon’s desperate attempt to coerce his Attorney General at the height of the Watergate scandal, demonstrates quite conclusively that Donald Trump has confused America with the Russian Federation. In a liberal democracy, you can’t use your bully pulpit to “order” the prosecution of your political opponents, especially when said opponent has been cleared of any wrongdoing by the FBI.

Unable to find a place to hide his unapologetic bombast, crudeness, lunacy and sheer ignorance, Donald Trump has simply conceded to standing on a stage for ninety minutes and embarrassing himself and his supporters; naked and defenseless in his failed con of the American people. Both debates have witnessed, rather than any sort of real competition, a competent and experienced individual pitted against a sad mountebank, whose false, vacuous, repetitive and grandiose remarks are a result of being full of shit and frankly, proud of it. This isn’t so much an election as it is a test to see just how far it is America is willing to fall to express anger it hasn’t even bothered to justify properly.

And, if you were wondering: Trump can resign, but his name is being printed on presidential ballots as we speak. It’s well past the ballot due-date in a number of states, indeed absentee voting has already begun. America – for better but almost surely for worse – is stuck with a national disgrace as its Republican presidential nominee.