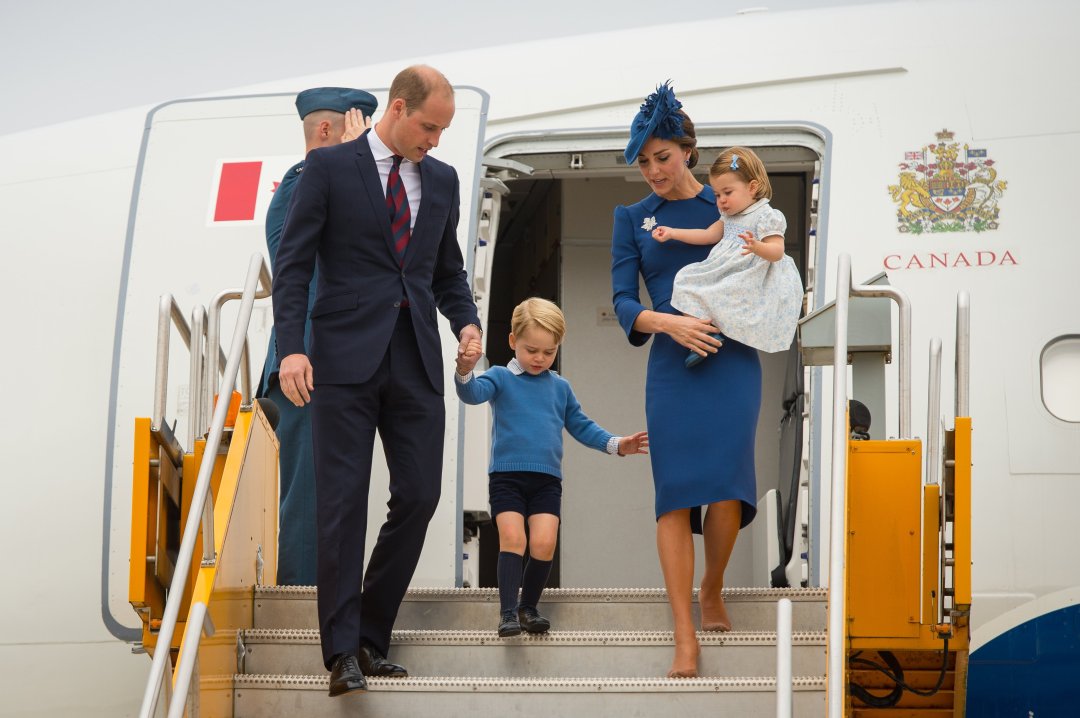 We’re stuck with the royals, so let’s make the most of it

Fair-haired Prince George, dressed (against his will, presumably) as a WWII era schoolboy, is greeted at Vancouver’s coastal flight centre by a gentle giant smiling fondly; the giant, the one they call the prime minister here, bends down, raising his hand for a high five…

…Trudeau lowers his hand, going for the ‘low five.’ The prince shakes his head coyly. It may be a while before Canada gets that handshake from its future king.

Many Canadians, no doubt, will watch the warm glitz and pageantry with feigned disinterest; secretly as excited about the royals as the rabble of unabashed royal watchers who greeted them as they arrived by float plane. They’re our country’s guilty pleasure. We might laugh at those fans even, secretly wishing we too were there. We might turn up the volume on a broadcast of the tour, while assuring the rest of our families we don’t ‘care about it at all.’ Yet many of us will care, even if cursorily so. Just there’s only so much enthusiasm we’ll be willing to admit.

‘Does admiring the royal family make me a bad democrat?’ one might wonder. It’s a question worth asking, if not a compulsory one. Ultimately, reconciling a love for the monarchy with a respect for democratic rule is an impossible task. The constitution from which a monarchy derives its legitimacy offers only a meager solace to the democrat; it can hardly dismiss the contradiction between the monarchy’s hereditary nature and our hopes for a just and equal society. But principles, like life itself, are boring without their impossibilities. Canada has always been a sum of its contradictions.

It’s certainty easy enough to be cynical about the monarchy…

For the most part, it’s accurate to say the monarchy is de facto irrelevant in Canadian society. Despite their significant constitutional role on paper, our dear head of state, and her representatives, the governor general and the lieutenant generals, have almost entirely been relegated to a purely figurehead role: signing off on appointments, reading throne speeches, issuing elections, handing out awards and entertaining dignitaries at Rideau Hall. Their value is of limited worth, consigned mostly to trivia questions that (amusingly) lull Canadians into identifying the name of their head of state wrong.

This month, 90 years ago, the 1926 federal election – the fallout of the tumultuous King-Byng Affair – proved decisive in ending a period of parliamentary instability. Byng, then governor general, in refusing to call an election at Prime Minister Mackenzie King’s (desperately self-interested) request, inadvertently sparked an ultimately tenuous shift of power to the Conservatives. King, outraged that Byng hadn’t allowed him to avoid a motion of non-confidence, resigned in protest and ran a fiery cauldron of a campaign, stirring up righteous discontent from the public against the crown’s intervention. Suffice to say, he won – and on 30 September 1926, Byng, who was in some senses, King’s real opponent during the election, would leave Rideau Hall and return to Britain.

Today’s governors general know better than to assert any real authority. When Stephen Harper, facing a similar non-confidence motion in 2007, ran to Rideau Hall to request – not just an election – but a prorogation of parliament, the then governor general hummed and hawed, consulting constitutional experts for two hours, before ultimately deciding to grant the prorogation like a well trained dolphin. The governor general would do so again at two other separate occasions in 2010 and 2013.

At this rate, the notion of a division of power between the state and the government is but a fantasy of which Canadians are neither convinced nor dissuaded; we disapprove of Rideau Hall intervening against the government, we disapprove of Rideau Hall not intervening against the government; we don’t want a dictator or a powerless bureaucrat for a prime minister, but a leader responsible for his or her own success and folly; and it’s from this creature of foibles that we shape the story of Canada, a brave and colorful tale of bums, villains and heroes. The monarchy is far from a defining aspect of Canada’s government as it is practiced today, it’s just flavor, or better yet, a preservative.

But despite our flippant assertions to the contrary, it’s still hard to imagine a Canada without its constitutional monarchy. It’s not as easy as you might think to simply wave the monarchy away from Canada’s constitution, especially not without re-opening it (a herculean feat in and of itself.) For starters, the First Nations’ numbered treaties are signed by the crown on Canada’s behalf – abolishing the monarchy would deeply complicate the legal relationship between First Nations and Canada and threaten the former’s treaty rights. The office of the Queen and her representatives are also protected under § 41 of the Constitution Act, which means abolishing the monarchy would require support from all the provinces, the House of Commons and the Senate. Moreover, referendums would have to be held in provinces that require a popular vote on provincial amendments – namely, BC and Alberta – which, coincidentally, is where support for the monarchy is at its highest in Canada.

Abolition would also blur the lines between the head of state and the government further – effectively making the prime minister, a president.

The most minimally invasive way to abolish the monarchy would be to change the rules of succession related to the Canadian monarch in such a way that it operated acephalously. Changing the rules of succession is a rare event; it’s happened once in 2013, when our government amended the rules of succession to be gender-neutral by way of a (rather loopy) act of parliament, Succession to the Throne Act, 2013 – but that was a move precipitated by the Perth Agreement between the 16 member states of the Commonwealth realm. A more unilateral move to change the rules of succession in Canada would be challenged in light of O’Donohue v Canada (2003), which, in dismissing the concern that Roman Catholics were barred from becoming Canada’s head of state, found the ‘symmetry of the crowns’ to be a constitution principle, a sovereign commitment that Canada and other commonwealth countries made with the Statute of Westminster, 1931. Ottawa, however, could create some ‘wiggle room’ for itself around O’Donohue by pursuing the change in conjunction with some other commonwealth nations, rather than doing so unilaterally, but it would still face a challenge from the Supreme Court, as it did in its Senate Reform Reference, which could hold such a ‘stealth’ abolition to be unconstitutional.

As a result of the Statute of Westminster it was recognized that any alterations in the rules of succession would no longer be imposed by Great Britain and, if symmetry among commonwealth countries were to be maintained, any changes to the rules of succession would have to be agreed to by all members of the Commonwealth.  This arrangement can be compared to a treaty among the Commonwealth countries to share the monarchy under the existing rules and not to change the rules without the agreement of all signatories.  While Canada as a sovereign nation is free to withdraw from the arrangement and no longer be united through common allegiance to the Crown, it cannot unilaterally change the rules of succession for all Commonwealth countries.  Unilateral changes by Canada to the rules of succession, whether imposed by the court or otherwise, would be contrary to the commitment given in the Statute of Westminster, would break symmetry and breach the principle of union under the British Crown set out in the preamble to the Constitution Act, 1867.   Such changes would, for all intents and purposes, bring about a fundamental change in the office of the Queen without securing the authorizations required pursuant to s. 41 of the Constitution Act, 1982. – Rouleau J. in O’Donohue. [Emphasis Added]

In other words: unless we move heaven and earth, Canada will likely always be ruled by its monarchy. And for some, this will be perfectly acceptable, since no matter the tenuous political and legal relationship, no matter how little influence we allow the crown to have in our democracy, many Canadians continue to have this guilty, but nonetheless, special and insatiable fascination with its royal highnesses. It’s that fascination that drives us to watch the Duke and Duchess of Cambridge with this inexplicable enthusiasm we have as they walk the Pacific coast with us. Of course, support for Canada’s monarchy is lowest among Quebecers, according to polls, who find it to be an enduring legacy of the United Kingdom, but it also faces opposition from Canada’s wealthiest: Forum Research found it was the wealthiest ($80K – $100K) who were in favour of abolition, after all.

That development may be surprising, but it is not without its antecedents. The people, the working and middle class, since the very development of the English monarchy have regarded their monarch as an appellate force – an ultimate deliverer of fairness and justice – and it’s from this sentiment that the principle of equity and the early Curia Regis arose. The economy, whether medieval or modern, produces vast social and economic inequalities. And it’s the monarchy – as opposed to the rest of the world’s wealthiest – who are intimately and constitutionally linked to the rest of the nation in virtue of the special role they’re expected to play. Whereas others inherit money and influence privately, removed from public responsibilities beyond paying taxes like everyone else, a royal’s birthright to the throne and the crown’s wealth, titles and estates comes with responsibilities and commitments to real people everywhere. For someone who holds great status, the monarchy is an anachronism in a modern capitalist society – an aristocracy antithetical to meritocratic principles – it’s unfair. But for the working poor, it’s perhaps the only kind of extravagance that carries with it even a veneer of fairness.

In a political system as complex as Canada’s, we can’t afford to be zealous pro-monarchists or republicans (nor can we be wholly neutral) but we ought to be pragmatists: Canada’s monarchy is neither fundamentally unjust nor fundamentally good, but with it being nigh impossible to abolish in the constitutional sense, it’s important we seize every positive we can out of its enduring presence in our social fabric to make the most of it.

To that end, this royal tour seems like a good thing for Canada. Over the course of this week, the royal couple will bring some much needed national and international attention to mental health issues, abuse and addiction in Vancouver’s East Side, visiting women’s shelters and the Kelty Mental Health Resource Centre – raising issues and striking a conversation on subjects that both the royal couple and British Columbia consider a major priority. With the prime minister by their side yesterday, they also discussed mental health issues as it applies to first responders at the Kitsilano Coast Guard Station. They’ll also visit the home to the Haida Nation, while raising the visibility of British Columbia’s majestic Great Bear Rainforest, Kelowna and Whitehorse, Yukon.

This is the Duke and Duchess of Cambridge’s second official tour to Canada; their first was in 2011.

One thought on “We’re stuck with the royals, so let’s make the most of it”