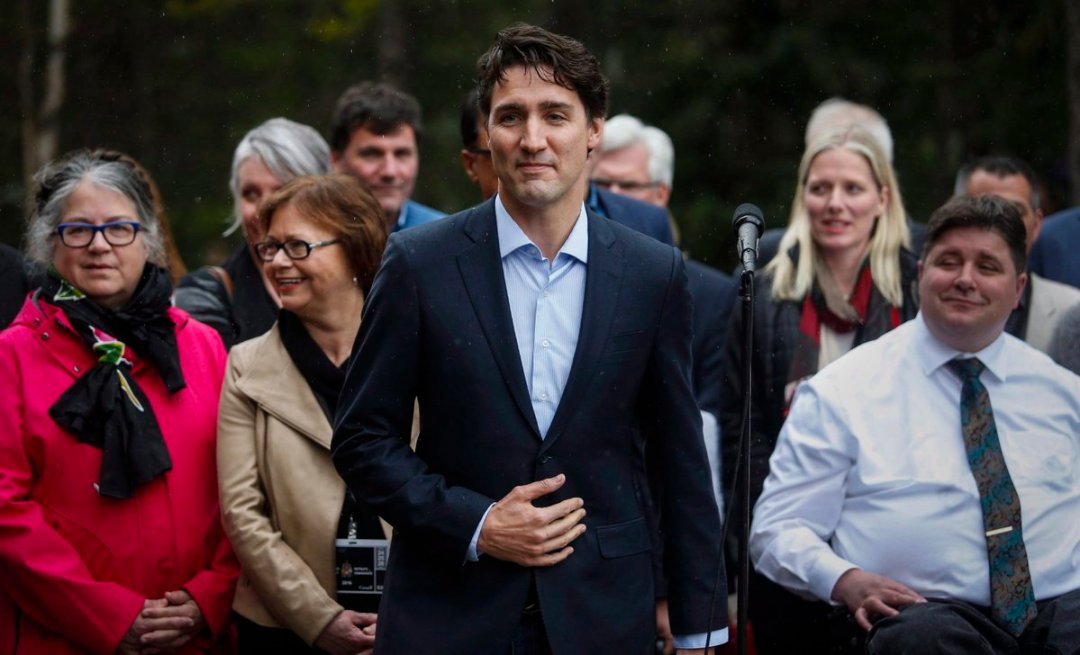 With the clock ticking, the Liberals must step up their deliverology

The House of Commons is back in session as of yesterday with the Liberals already facing criticism from some that it may not be making progress on its ambitious agenda.

Certainly, there have been some exceptions: the government has negotiated an expansion of the CPP, it’s achieved its target to resettle 25,000 Syrian refugees (albeit after its due date), launched a new mission in Syria and created an independent advisory board for senate appointments to select new ‘independent’ senators. But in terms of the number of bills that parliament pursued last session, Trudeau’s administration has been labeled as the quietest in decades in terms of its legislative activity.

The latter is an uncomfortable accusation for a governing party that’s embraced deliverology as one of its guiding principles in the hopes of achieving measurable success.

For the uninitiated: deliverology is the mantra of the UK’s Sir Michael Barber, an educationist regarded by some as the “mad professor” of New Labour from the Blair government. He’s since been invited to discuss deliverology at three cabinet retreats for the Trudeau administration, the latest of which took place last month in Sudbury at Laurentian University. Barber’s connection to the Liberals may be through Queen’s Park, where Trudeau’s senior principal secretary worked as McGuinty’s principal secretary while Barber assisted the premier’s efforts to overhaul Ontario’s education system.

In his latest book, How To Run a Government So that Citizens Benefit and Taxpayers Don’t Go Crazy, Barber elaborates on how governments can ‘deliver’ on their promises better through practical management and organization techniques; a kind of sabermetrics for government that simplifies the agenda ahead into core measures that can be tracked and centrally responded to with a plan tailored to perform. The book is written with a biting forthrightness, characteristic of the man who made a name for himself undermining the attempts of Whitehall’s civil servants to stymie the government’s education and transportation goals. He also draws an important relationship between information and government transparency to government accountability and responsiveness; for him, getting results requires the openness to name, shame and respond to failing performers.

While deliverology sounds good in theory, the problem the Trudeau administration faces though is it’s hard to say as an outsider where it is Barber’s ideas are being implemented.

For starters, Ottawa has seen most of its major policy areas bogged down with major public consultations over this past year – a defense review, culture, electoral reform and environment consultations, a national inquiry into missing and murdered Indigenous women and girls – its calendar has been chalk full of consultations into a myriad of issues including energy, consumer product safety and the future of Canada Post. Barber warns his readers of relying on these consultations in How to Run a Government, preferring very short, informal consultations instead for their quality and efficiency.

While these consultations may help to build a better legislative response down the road and some of them (MMIW) may be campaign promises and/or important for the sake of legitimacy, they may also be an attempt to tread water while the government – already aware of where it is going with a specific policy – waits for an opportunity to broach the subject. The Liberals’ promise to reform C-51 especially appears to be caught in a consultation merry-go-round without immediate signs of progress.

On a more positive note, however,  the justice ministry is making considerable headway: holding an informal meeting with justices and criminal lawyers (a ‘guiding coalition’ as Barber might say) that quickly established the high incarceration rate as the prevailing concern of today’s criminal justice system; plus shortening its consultation time frame. This fluid, creative process will be necessary for the Liberals to meet their own party’s expectations of “real change” within its four year mandate; every year spent on public consultations and federal reviews burns time and government resources.

To her credit, Health minister Jane Philpott appears to have heeded Barber’s message in How to Run a Government; the author, sharing his own anecdotes from the UK school system, denounces providing new “no strings attached” support for organizations while expecting better results. On this precise issue, Philpott herself has already set Ottawa into an intergovernmental standoff with the provinces over the new multi-year Health Accord (meetings for which are expected to resume this fall.) Her position – against the provinces, especially Quebec – is that targeted spending, rather than spending carte blanche will improve results and bring positive change to the health care for Canadians.

And while the infrastructure spending plan hasn’t been without its negotiations too, Barber’s warnings may just be as relevant to infrastructure as it has been for health.

The plan in question, to use low interest rates to ‘grow the economy’ (as politicians like to say) with a $12B investment, has attracted criticism over the past economic quarter for failing to deliver an appreciable change in the country’s economic growth yet.

Indeed, this kind of loosely supervised spending creates ‘projects,’ Barber suggests – as it has for the federal government all summer long in the form of initiatives, news releases and photo-ops – but that unfortunately doesn’t mean that it will necessarily translate into ‘real’ results for the Liberals. The negotiations, which ceded to the will of municipalities who wanted new federal money for cultural spending, stretched the infrastructure plan to support ‘cultural’ and ‘social’ infrastructure. As a result, one might wonder if those concessions may have compromised the value of the infrastructure plan if the multipliers for cultural, social and green infrastructure prove lower than the relatively high multiplier for infrastructure investment that the 2016 Budget assumed (1.4.)

Environment minister Catherine McKenna is also stuck in a similar delivery ‘rut,’ with her hands tied on the climate change file because of detractors (again premiers) to her plan to price carbon. While some form of carbon pricing is a well established market-based method of pursuing meaningful carbon reductions, a federal carbon price has drawn the ire of premiers, from Saskatchewan and Nova Scotia especially, for threatening to raise the cost of living and treading on existing provincial efforts.

To accommodate the federal-provincial bickering, the full climate change plan has been pushed back till after Canada’s official ratification of the Paris agreement and McKenna has also said she will maintain the Harper government’s emissions targets. The minister, defending the latter decision, argues the specifics of the targets are less important than the process to achieve those targets – a laudable defense, which demonstrates her commitment to achieving something more than setting new targets without a plan to reach them – as happened with Kyoto and Copenhagen. But any student of deliverology would anticipate the danger for the plan that undoubtedly lies ahead…

For one thing, the federal government is pursuing targets without an agreement with the provinces before ratification; targets for which its environment minister have admitted are the absolute bare minimum it needs to achieve.

To do as McKenna has suggested – implementing a carbon price on provinces that aren’t reducing their fair share of carbon emissions – she will first have to design a method of finding the equivalences between the various provincial plans to reduce carbon (e.g., carbon taxes, cap-and-trade, carbon capture) that measures their results accurately in a comparable manner. Shoddy carbon accounting in this case, while smoothing intergovernmental relations and letting provinces off the hook for unsatisfactory programs, would undermine Ottawa’s hopes of reducing Canada’s carbon emissions.

Certainty, there are reasons to suggest why deliverology might not be suited for the Liberals in their hopes of achieving fundamental changes; especially when deliverology was always incrementalist in nature.

On a file like indigenous affairs, for example, deliverology simply appears to be ill-suited: new measures of well-being are only one of the 94 Truth and Reconciliation (TRC) recommendations that Trudeau adopted as a commitment. Similarly, attributing a core measure to other TRC items like fixing Canada’s child welfare system will prove to be a real headache for civil servants to find something longitudinal and practical, that will give immediate feedback on changes without being vague or prone to producing perverse consequences (e.g., keeping families together to the detriment of their children.)

Assembly of First Nations national chief Perry Bellegarde has recently said the results from the 2016 Budget have yet to make a difference, saying ‘we’re not seeing it out on the ground’ and ‘we’ve got to find more effective ways to get the funding flowing out.’ Which again suggests an issue with implementation and delivery.

Indigenous leaders, after Harper’s disastrous First Nations Financial Transparency Act and past policy failures, are already deeply suspicious of the pushes for accountability and executive-driven policymaking that Barber is advocating, but, in fairness to Barber, his tact in following up on situations as they develop would go a long way to undoing the short-lived, short-sighted approach Ottawa has shown to people, Gord Downie quite rightly said, ‘we’ve been trained all our lives to ignore.’

Ultimately, this fall sitting is expected, for all intents and purposes, to be a more or less sleepy affair – the timelines for most of the government’s plans are converging in December (and for that reason, you can expect a heated crucible of a winter sitting as the government releases its plans for electoral reform, defense, health and marijuana.)

Regardless however, there are troubling signs emerging that the Trudeau Liberals are facing a serious challenge to make gains – ‘real change’ as it were – in the policy areas where they campaigned on most and the areas on which their administration will be most closely judged: indigenous affairs and climate change. In the coming months, their brain-trust will have to consider whether deliverology is really suited for its purposes and if it is, commit their administration to putting it into practice. Time to get a move on it.

3 thoughts on “With the clock ticking, the Liberals must step up their deliverology”