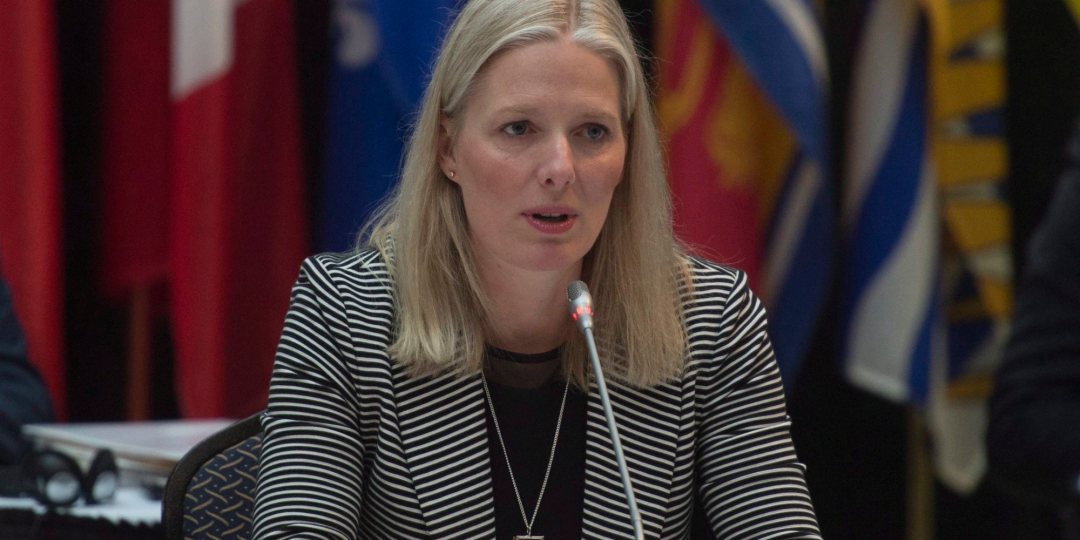 How would a “carbon neutral” federal government work, anyhow?

Environment Minister Catherine McKenna dropped a large trial balloon last month when she said she hoped to see the federal government become ‘carbon neutral’ in the future. It appears her low key musings though may have been missed during all the fun of the Three Amigos summit. For the uninitiated, I’ll explain: carbon neutrality means the government would effectively become net-zero in terms of its carbon emissions. For what impact the government is responsible for it, it would try to give back by supporting green projects, such as forestry projects and solar farms.

Achieving carbon neutrality would predictably follow a three step process, two of which are already being done:

For the purposes of speculating, we can assume a carbon neutrality initiative on McKenna’s part would simply be an update or an extension of the existing Federal Sustainable Development Act, which requires the environment minister to table a new Federal Sustainable Development Strategy (FSDS) every three years. However since the last strategy (2013-6) is set to end this year, we’re already anticipating the new government to finalize its updated strategy (with new goals and new methodology) for 2016-9. A draft of said new strategy (albeit without any mention of ‘carbon neutral’) was tabled this February and was open for public consultation until the end of June.

If the “carbon neutral” plan isn’t introduced as apart of the new FSDS, it could be introduced independently or otherwise pursued with the government’s new FSDS in 2019, just before Canadians are set to return to the polls for the next federal election.

The Federal Sustainable Development Act, which the new government has inherited, was the brainchild of the Harper Administration . It sought in 2010 under then Environment Minister Jim Prentice’s strategy, among other things, to centralize and quantify the federal government’s efforts to curb its own environmental footprint using six main targets regarding waste and water management, ‘green’ procurement, sustainable building and, yes, carbon emissions. The act itself covers 26 federal departments and agencies – although a number of agencies like the RCMP, Statistics Canada and the National Energy Board, have voluntarily implemented the plan’s strategies.

It’s unclear just how expansive a carbon neutrality goal would be. That is to say, to whom it’d apply. A number of agencies and crown corporations are not covered by the Federal Sustainable Development Act, so activity in those quarters would have to happen outside of the existing regulatory system with something brand new – that is, if the minister had intended for them to be included in the new goal.

But of what the existing act does cover, there is no shortage of waste. In fact, this sprawling beast accounts for more than 30,000 buildings owned or leased, 16,000 vehicles, 250,000 employees – and a carbon footprint of 1.36M tonnes of CO2. The latter of which is ultimately calculated using the Federal Greenhouse Gas Tracking Protocol in such a way as to avoid counting provincial efforts to rollback coal as if it were the federal government’s own emissions reduction.

But after these past five years, it’s hard to say whether the FSDS has really achieved very much with regards to the size of the federal government’s own carbon footprint. In fact, I’m being charitable when I say “it’s hard to say.” The Harper administration had set a goal of reducing the government’s carbon emissions by 17% (230kt CO2) by 2020, but in the last year of their mandate they reported they had only reduced their yearly emissions by 2.5% (34kt CO2). In other words, the federal government had taken five years to meet only 15% of their reduction goal and still expected, cheekily enough, to meet the other 85% of that target in the next five. Yikes.

Better get changing more of those light-bulbs, eh boys?

A carbon neutrality target would help the government reach its hopes to reducing its emissions, applying more pressure on departments and agencies to cut down on waste. But it should be said research suggests carbon neutrality as a target is insufficient to encourage reductions alone on a consistent year to year basis. Thus, reduction targets, such as the one the Harper administration put in place, will still be necessary to encourage reductions even with the federal government putting a price on its own carbon. Rather, the practices, both targets and offsetting, are meant to be complementary and observed simultaneously.

It’s worth mentioning the British Columbia experience in this case, which is, if anything, quite instructive, offering a cautionary tale to the rest of Canada. BC has been able to boast its provincial operations have been carbon neutral for the past five years now – this development’s come as the fruits of a landmark commitment by the Campbell government in 2007 to achieve carbon neutrality by 2010, which (along with its provincial carbon tax) set the province significantly apart from others in terms of its climate leadership.

In the BC case, those involved used special programs, SMARTTOOL and SMARTTEC, to assist them in their carbon accounting – the government’s plan was especially focused on the carbon footprint related to building and energy inefficiency, business travel (core business) and paper consumption – not considered was waste disposal, outsourced activities and employees commuting.

Public Service Organizations (PSOs) would buy ‘credits’, $25 for each tonne of CO2 it accounted for, from a new ‘Pacific Carbon Trust.’ That Carbon Trust was in turn expected to purchase carbon offsets in the province to realize BC’s carbon neutrality goal. But after being accused, among other things, of mismanagement and administrative bloat, the “much maligned” Pacific Carbon Trust was canceled in 2013 and its operations were brought under the umbrella of the environment ministry directly.

Where did things go wrong? For starters, the Pacific Carbon Trust was accused of paying above market prices for its offsets at $10 per tonne, rather than the global average for forestry projects ($5.49.) Here, we can imagine if the federal government, rather than BC, were undertaking this project, Ottawa would probably have to invest say $15-20M each year in offsets, to compensate for the size of footprint identified by the current FSDS – that is, $15-20M at the same above market prices BC was paying. At typical market prices, the federal government would only be paying somewhere around $7.5M to offset its operations each year. But by 2013, evidence suggests schools, universities and hospitals were getting soaked by the Pacific Carbon Trust, which, collecting $25 a piece for each credit, had generated a handsome $30M surplus in government revenue.

What we find in the British Columbia case is a toxic cycle: sellers of offsets had a financial incentive to overstate the impact of their offsets, while buyers, like the Pacific Carbon Trust, had an incentive to focus on the sheer volume of offsets they were purchasing without concern for their credibility.

In other words, the provincial government projected far more trees to be cut on the Darkwoods property if the Nature Conservancy of Canada (NCC) hadn’t bought the property than what would have been cut. Rather than assuming any loggers would follow common practice, BC effectively fudged their numbers to make it look as though by buying the property they were preventing a mass liquidation, napalm and all, which made the Darkwoods project out to be worth more in offsets to the province than it really was.

If the federal government ultimately does choose to adopt its own carbon neutrality goal, one hopes it will learn from the mistakes of British Columbia. Carbon neutral government offers an opportunity for Canada to set an example of itself as a climate leader, but it’s also an opportunity to improve the government’s transparency regarding its carbon footprint and challenge the size and inefficiencies of our departments and agencies – forcing officials to consider what conferences, meetings and paper can be digitized, what vehicles can be replaced with hybrid and electric vehicles, and how their energy use can be curbed.

There are multiple dimensions to the benefits of the plan: leadership, for starters, but also fiscal and environmental responsibility. However, bad bureaucratic practices ought to be avoided – littered along the path of good intentions in the climate change file are tales of ‘green elephant projects,’ shoddy accounting, and people getting taken advantage of. McKenna would be wise to emphasize in her own plan the need for third party verification to ensure any carbon offsets the government purchases are credible. But from me – that having been said – this trial balloon receives an apprehensive, but eager thumb’s up.