It’s a tense, trying afternoon in Ottawa. Government House Leader Dominic LeBlanc reads a controversial motion to the House of Commons over shouting and cries of shame – the Speaker interrupts, addressing the fury of the opposition benches, “Colleagues, we just heard arguments about the tyranny of the majority and the tyranny of the minority,” he says, “I do not think we want to have either one of those tyrannies in this House. There is a tyranny created by that kind of noise.” With the Speaker’s permission LeBlanc continues to read the motion. It’s object? To cut the time of debate on the government’s assisted dying legislation (Bill C-14) to two days in the House, one for its report stage and one for the third and final reading in the House of Commons – this move, while restricting the opposition’s input and influence on the bill, was intended to speed the bill’s passage along before the Supreme Court’s deadline of June 6 when Carter v Canada’s ruling comes into effect, effectively decriminalizing physician assisted suicide.

Not long after, the division bell rings through the House of Commons. Members of Parliament take their seats for a vote on the motion, some faster than others – a noticeable possy forming on the floor. Government whip Andrew Leslie stands to the speaker’s right and takes a bow, as per tradition, then glances over to his right, noticing the Opposition whip isn’t in his place to bow alongside him. Although the Opposition whip’s presence isn’t strictly necessary in this instance (as others have pointed out,) traditionally before a vote begins the two Whips bow together to the speaker. Leslie looks over his shoulder to see a chaotic scene emerging. A Conservative MP standing beside Leslie, looking over at the confusion, can be seen raising his arms – what the hell’s going on? Opposition whip Gordon Brown, a shortish fellow, attempts to nudge his way through a throng of NDP MPs. In particular, Mulcair and Christopherson, their backs to Brown, shuffle around, blocking Brown’s path.

You can almost hear the Benny Hill theme song in the background as Brown waffles around, unable to get past the shield of bodies the NDP were forming on the floor. As time ticks, some mischievous smiles on the offending members could be spotted by eagle-eyed CPAC viewers; Elizabeth May later calling this delay tactic, “innocent mischief.” Tick tock, tick tock. Some fifty seconds passes before the Prime Minister, visibly irate, rises, stampeding briskly across the floor to butt into the crowd – “get the fuck out of the way,” he snipes at the flock, grabbing Brown’s arm and elbowing an NDP MP in the process. The immediate reaction of the Conservatives is, not to cry shame, but rather to actually clap at Trudeau helping Brown through the orange pylons barricading the floor. It was not until after the news of Brosseau’s elbowing emerged that the Opposition’s narrative would change against Trudeau – a possible good news story (as hard as it is to imagine this act of stupidity going well) becoming a tireless slew of apologies and a lead-in to the Prime Minister’s first political crisis. 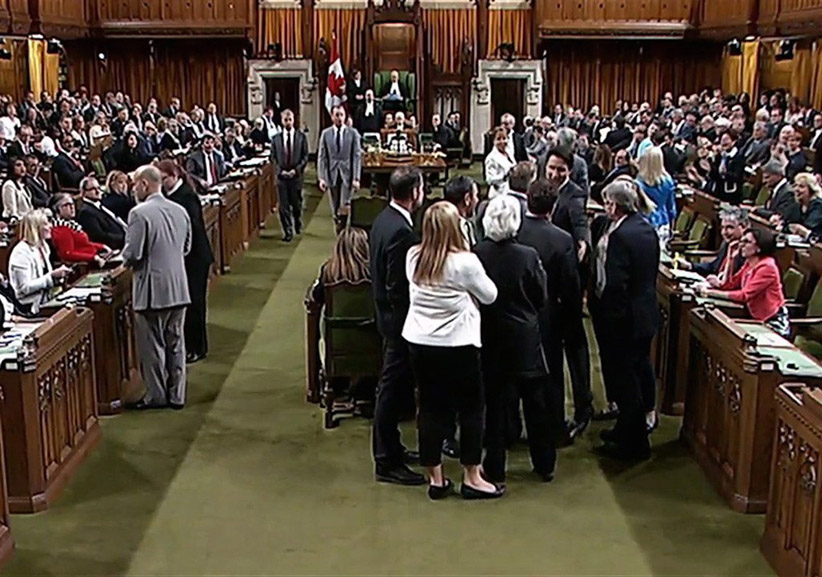 This Frankenstein of a public relations disaster, known as #elbowgate by many, has taken Ottawa by storm – giving the Opposition leverage to use against the government for its attempts to limit the Opposition’s procedural power and tools to debate (and delay) legislation in the guise of a much derided monster, Motion 6. Each condemnation of the Prime Minister’s actions was tellingly couched with strategic calls for the immediate withdrawal of Motion 6, along with a choice noun to label the Prime Minister’s actions: “assault,” “molestation,” “physical violence,” – folks, we heard it all, with colorful allusions one can only get away with under parliamentary privilege, from spousal abuse to dead aunts (and the list of painfully offensive exaggerations continues, rest assured.) “If he truly respects the role of Opposition, and the role of every member of the House,” prefaced Opposition leader Rona Ambrose, “then he has to withdraw the motion.” The ultimatum was clear and it wasn’t long before the government folded its cards, dropping Motion 6 from the Order Papers. But the fight to get a federal assisted dying law passed before the Supreme Court deadline still looms.

This incident, tiring and absurd as it is, appears to be a creature of frustration. The government, tired of recent stall tactics, reached beyond its own conscience for a heavy-handed (har har har) answer. A breather seems to be in order for the Prime Minister and his cabinet. One question is whether any of this is necessary. Whether, that is, the June 6 deadline is a crushing, self-imposed crisis. It seems unlikely this government legislation will be law anytime soon – the House of Commons won’t finish debating the law until the end of May leaving only a few days (an almost farcical notion, we’re talking about senators here!) for the Senate to approve the legislation. A number of senators have already indicated they don’t expect to meet the Supreme Court’s deadline. So, really, what’s the rush? The deadline will not be met despite the government’s best efforts and if it were met, it would be met with a bill that doesn’t satisfy the Special Joint Committee on Assisted Dying’s conditions, doesn’t necessarily meet the Supreme Court’s ruling, and has attracted numerous concerns, from the Senate pre-study and opposition members, that it’s either too liberal or isn’t liberal enough!

When you feel as though your idealism is being exploited and tested, the temptation is to toughen up and channel your inner Chrétien, but it’s wisdom, not brute retaliation, that gets you through these challenges. The government may believe it will wear any impending legal vacuum if the Supreme Court deadline isn’t met, but the reality is, through its own actions and its own domineering presence it’s set itself up to bear the brunt of that responsibility. Assisted suicide isn’t a Liberal campaign promise and Bill C-14 isn’t a particularly liberal response to physician-assisted dying – so, it’d be in the Prime Minister’s best interests to take advantage of this opportunity to lead the kind of government, open and collaborative, that he was elected to lead. Rather than trying to stick-handle an unpolished turd through Parliament as if it’s a power-play they need to waste their good name on, Trudeau should pull the PMO and Langevin Block off of the assisted dying file and give Parliament the space, time and freedom it needs to build an adequate, “all-party” (ish) response. By better involving the rest of Parliament in the process, Parliament, not simply Trudeau and his war room, will be responsible if legislative delays cause issues as Carter v Canada takes effect. The lesson for the Liberals here is you set your own markers for success, so choose your battles (and your compromises) wisely.

With Motion 6 buried and dead, let us hope that Parliament can start anew when the House of Commons returns at the end of the month to continue to discuss assisted suicide and, moreover, let us hope the Opposition’s shenanigans, which helped prompt the government’s contempt, don’t return anymore than the circus it helped to created. Opposition in Parliament ought to offer thoughtful criticism and collaboration, its prized “democratic tools,” transparency, time and debate, not stall tactics and filibustering. What we saw on Wednesday however was nothing more than desperate foolishness on the NDP’s part. The image of Mulcair, blustering and red-faced, pinned by his colleagues, as he called the Prime Minister “pathetic” is one I hope he regrets, but it could well become our country’s lasting memory of him. The Opposition did no favours for themselves this week by behaving like children and testing the intelligence of its supporters with over-the-top, exaggerated accounts of the Prime Minister’s actions. One more apology is in order and it’s from Tom Mulcair, but I won’t hold my breath on that one and neither should you, dear reader, lest you keel over and die with bated breath. 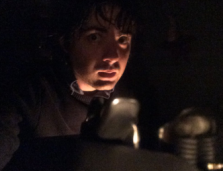 Richard Forbes studied Political Science and Philosophy at the University of Waterloo. Winner of the Peter Woolstencroft Prize in Canadian Politics (2015).