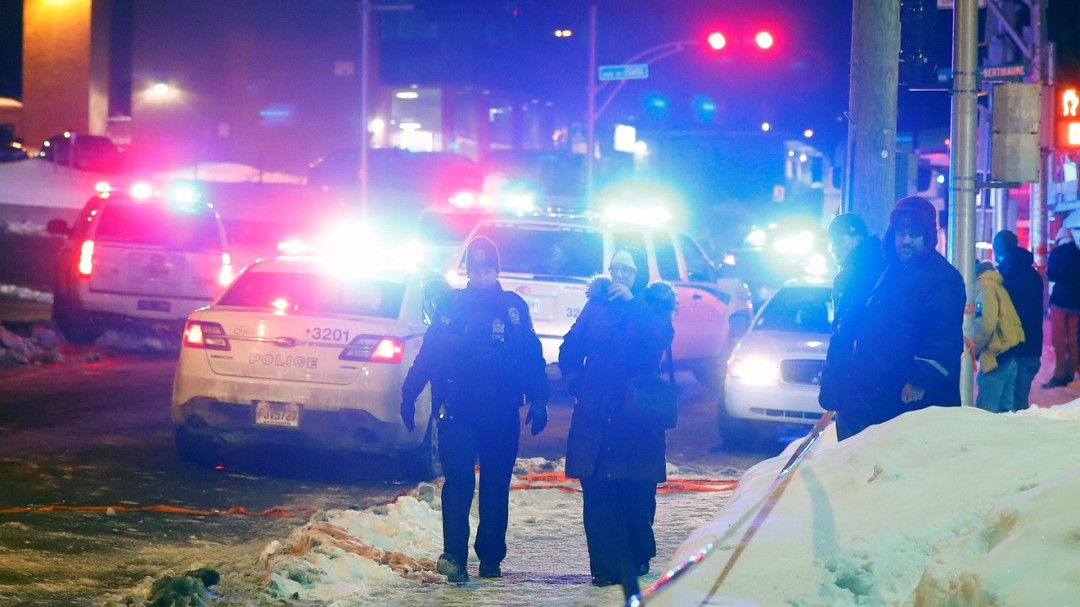 Terror for a post-truth world

Tragedy struck Sainte-Foy, Québec City this past Sunday. A masked gunman entered a busy local mosque, the Centre Culturel Islamique de Québec, and opened fire on a night prayer. As a result of his violent act of terror, six were killed and nineteen were injured.

Soon after, we learnt that the accused, Alexandre Bissonnette, was a right-wing, anti-feminist white nationalist, and that he was a supporter of France’s Marine Le Pen and Donald Trump. Also coming to light were small details about those killed in the attack: fathers, neighbors, a grocer, an IT techie, a professor. And we also learnt of the history of the mosque: the centre’s language and religious services and its important role in the Islamic-Québécois community. We learnt about the recent rise in hate crimes and vandalism in Québec City, and a pig’s head, complete with a greeting’s card, ‘Bon appétit’, that had been left on the mosque’s front door during last year’s Ramadan.

These are the facts, the simple truth behind the weekend’s horrible end – one of the worst terrorist attacks in our country’s history. But it was truth, the basic knowledge of what had just transpired, which was scarcely available that night and in the hours that proceeded.

Only moments after news hit social media of the attack, a reddit post began circulating excerpts from a false ‘police radio’ dispatch online which named the attackers as ‘recent Syrian refugees’ ‘Bashir al-Taweed’ and ‘Hassan Matti.’

These mishmashes of names and surnames – which could simply be the product of a online random name generator – helped fuel early rumours that the attackers were themselves Muslim. Not to be out done though, this spurious poppycock was then thoroughly outpoppycocked by images accompanying terrorists ‘al-Taweed’ and ‘Matti’: images of Wassim Boughadou and Tarek Sakr, lazily ripped from news reports from December; events wholly unrelated to the Sainte-Foy attack.

Of seemingly vital importance that morning was the challenge of scouring for and disseminating bogus information; a call to arms so glorious that legitimate news sources (who should have known better), far less legitimate news sources (who don’t care) and private individuals (who actively practice truthlessness on a daily basis) could hardly resist the temptation to report, re-report and re-re-report information regarding the identity of suspects. These reports varied from being true in some instances, to technically true, or false, ridiculously false, and others so terribly warped in their misrepresentations that they would be funny if they weren’t so manifestly wrong.

Mohamed Belkhadir received perhaps the worst treatment of the lot. His name was quoted (and misquoted as “Mohamed Khadir”) by a number of news affiliates as a suspect. But as it turns out Belkhadir, a young engineering student from Université Laval, had been nothing short of a hero that evening: calling 911, giving his coat to a victim and performing first aid. The source of the confusion was that Belkhadir had run when he saw a gunned man; understandably, he hadn’t recognized the armed silhouette as a police officer. But it was Belkhadir’s Muslim first name and unsubstantiated reports that the gunman had cried “allahu akbar” which were latched onto by right wing news sources: desperate to claim a grand conspiracy was somehow at play and pin the violence on immigrants.

Runner-up for the most bizarre, and frankly, pathetic distortion of the truth came early that morning from White House press secretary Sean Spicer who used the attacks on a mosque by a Caucasian French Canadian as a defense for the President’s anti-Islamic-terror policies (which target Muslims as the source of terrorism.) A cruel irony challenged only by the shamelessness of conservative commentator Faith Goldy of The Rebel who sought to monetize the terrorist attack via QuebecTerror.com (a domain they bought) – asking for donations with a fundraising page that accused the ‘mainstream media’ of burying the truth about fictional suspect ‘Mohamed Khadir’ – in a barefaced display of conspiratorial inanity.

It’s especially precious coming from The Rebel, a network that can be relied on to take a temper tantrum on a semi-seasonal basis if and when it’s denied media accreditation in various forums for its unprofessionalism.

Like any good kid from the noughties though, I remember, and wrongly thought I had outlived the era of the chain email. But here we are, 2017, and we’re still immersed in social media deliberately manipulated to fit someone’s politics. My late grandfather was especially prolific with chain emails, forwarding them en masse to hundreds of people at a time as if he were a one man tabloid. One of the more memorable chain emails he sent to me bore a supposed picture of seventeen year old Trayvon Martin, captioned: “They don’t show the up-to-date pictures of Trayvon Martin, in the media. Now you know why. Kinda scary, ain’t it?” Except the photo wasn’t an image of Trayvon Martin but in fact a then thirty-two year old rapper from Compton, California, Jayceon Terrell Taylor.

When I pointed out the falsehood, my grandfather asked me why someone would spread such a lie. To him it was such a foreign notion; that is: private individuals lying about news events, deliberately lying to other people.

And it’s still a good question. Why?

What compels people to deliberately go out of their way to distort and mislead people? They may have strong feelings for a political ideology, sure, but when you yourself are having to lie to support your ideological positions, surely that should, in any rational person’s mind, undermine your steadfast determination to defend said position?

But what is ideology without truth? The answer of course is self-deception, irrationality and propaganda. With their dogma so predicated on the belief that Muslims and refugees are dangerous elements of society, these fanatics are unable to accept events like the Sainte-Foy attack for what they are: minorities as the victims, rather than the perpetrators, of terrorism. Instead, they practice a most sinister form of chinese whispers, one where the message is our social and political reality and the distortions – the puerile jokes and mondegreens – that they and their colleagues want to sabotage the message with is hate. Hate that has consequences. Hate that closes borders and builds walls, burns bridges and terrorizes good people. But this isn’t a game. So please: grow up.

But even in this post-truth world we live in, it should be said there are some truths that can never be extinguished. Chief among these is the fact of our humanity and our basic decency. While the events of Sunday evening may have rightfully had us all questioning that fact, what followed the day after, however, came as a genuine reassurance that even in these dark times there is still hope and compassion in us and a country still worth being proud of in Canada. Although the redemption of Canada was not the goal of the vigils, I would like to think that in the thousands of people who stood out in the frigid cold that dour Monday in Iqaluit and Calgary, Winnipeg, Moncton, Toronto, Vancouver and, of course, Québec City – and in the images of a people united in mourning, that some saw something worth believing in, something to take to heart. A country that abhors violence, shares each others’ hardships and braves the cold together.

One thought on “Terror for a post-truth world”